It was but a day or two ago that I rekindled my love for this Castle Crashers and the hours of entertainment I enjoyed at this game. 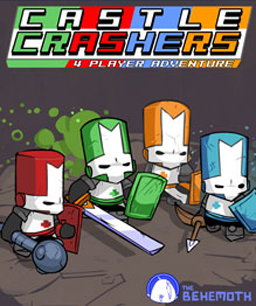 So let’s start off with some info…

Castle Crashers is a 2D side-scrolling fantasy game developed by Behemoth where players choose from one of four knights and set on a quest to defeat the evil wizard and save the 4 princesses across multiple kingdoms. Along the way, you earn gold by killing enemies or finding treasure and you can use this gold to buy items, weapons and pets who follow you and provide a bonus. Of course, you can also find weapons, items and pets across the game’s levels too.

To play to Castle Crasher’s strengths, it’s a combination of fast-paced and tactical gameplay with the option of co-op locally and online, as well as fun versus modes. The cartoony visuals and effects play to the whole fun-themed fantasy rather than a gritty adult game and as such it is suitable for all ages, particularly children and young teens. In a contradiction to what I previously wrote, the fast-paced action, as well as the idea of “collecting” weapons and pets makes an ideal hook for hardcore gamers or “completionists” of even older generations. The fact that co-op is encouraged makes for family situations or a gaming session with friends and versus modes are added to the mix signify that there is accommodation for competitive gamers too. The clever blend of co-op and helping your team, to then reach the end of a level and fight for a princess’ affections keeps any players on their toes and generates a friendly atmosphere for competition. 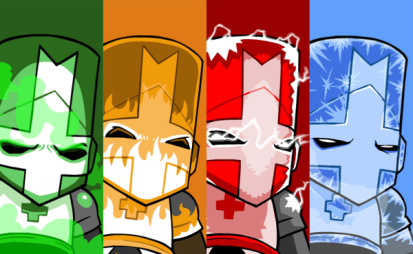 Now another feature about Castle Crashers, is that you can unlock new characters to play, each with their own unique appearance and powers, which range from a peasant, to beekeeper, to an alien (requirements need to be met for characters). As mentioned before, this is very much a fun-themed game and the vibrant, ultra-modern art style makes for a beautiful firework of colours when action gets heavy.  As a 2D side-scroller, the controls are easy to learn and it adds combos and magic combos for those looking for a bit more flair with their fighting style. Levelling up and increasing your character’s stats improve gameplay performance in terms of combat and utility which results in more flashy combinations of moves. To meet this gradual rise in the player’s skills, the difficulty gets harder in the more exotic levels of the game and when the game is completed on the first playthrough, an option to go into a higher difficulty game is available. The easy revisiting levels or leaving levels at any time means that hours of gameplay can be done at a time, or just quick sessions for those looking for an entertaining break, it certainly encompasses players of all times and schedules. 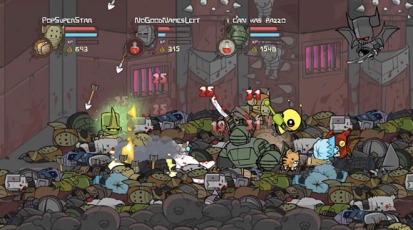 Unfortunately, there are some hitches with Castle Crasher’s game mechanics that hinder overall potential:

For starters, the co-op can be quite frustrating for some if their favourite character is chosen by someone else. As you can co-op with virtually anyone, you may find low-level players meet with high level players and fight in areas that they either haven’t unlocked yet, or are too high a difficulty for that low-level knight to fight against… Thus results in many deaths. The way the level selection and map works in co-op means that anyone can move and select a level, so there are often arguements about where to go with the group moving back and forth. There is the likelihood of hackers in the game that ruin the overall experience too. Ultimately, there are a few negatives within the game that affect overall fun that can be had, but whether deemed as frustrating or just a nuisance that can be overlooked by the player will determine how much enjoyment is felt.

Personally, there are always going to be problems with any game but it all depends on the a developer’s care for their products that can sway an audience. Fortunately Behemoth take great care with Castle Crashers and apply consistent updates to remove bugs, glitches and improve gameplay for everyone. I reminisce when I first purchased and played the game from the Xbox Live Arcade, where I was instantly hooked to the action-packed side-scrolling adventures, defeating many enemies and collecting various treasures. I was virtually addicted to the game for a few months straight as the whole RPG experience of levelling up and collecting powerful weapons kept me playing and playing and playing for hours. The varieties of enemies and bosses to combat, as well as the many people I met online to fight these enemies with, made Castle Crashers one of the best video games I have ever played. Some days I found that combat can get a tad repetitive and this was empathized by fellow gamers, so I had to find new ways to dispatch my enemies and I rekindled my love for this title.

In a summary, it’s fun-filled, has fantastic artwork as well as cool gameplay elements and various RPG elements. Co-op and versus modes are addicting and there is tremendous replay values. There are annoyances with cooperation and bugs, but they can be easily avoided or fixed. I would recommend any gamer and also aspiring game-developers to buy this game from Xbox Live Arcade or the Playstation Network and find their own slice of comedic entertainment, so hack, slash and sling your magic and SAVE THOSE PRINCESSES!… Oh, defeating the bad guys would be nice too. There is a vast, world-wide community of fans for this game that can tell you much more about this game than I can, so please check the Castle Crashers website for more.

Castle Crashers costs 1200 XBL microsoft points, from Playstation Network or from Steam on the PC, all pricing at $15. 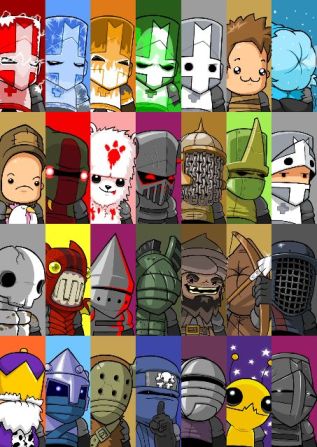 Just a quick post to satisfy you all. I made this avatar picture for a friend on the Dark Souls video game forums. The idea was to create a chibi of a paladin with the Knight Solaire sun in the background. This all features from the video game “Dark Souls” by Konami.
Here: 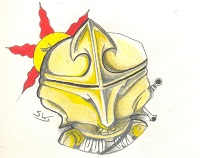 Isn’t he cute? I think so. As small as it is, it needed to be for the specs of an avatar picture for the forums. It’s a mix of pencil, graphite and fineliner that adds 3 grades of tone and depth. Hope you like it, this is me, signing out.

Initially the weather was swampy in terms of rain, sludge and mud… But it picked up towards the end of the festival, where I saw some of my favourite bands: Nightwish, Shinedown and Edguy. With a mix of heavy rainfall, mud and blazing sun, it really was some confusing weather that left me with a mix of emotions, but some of the bands got me to enjoy the experience overall. 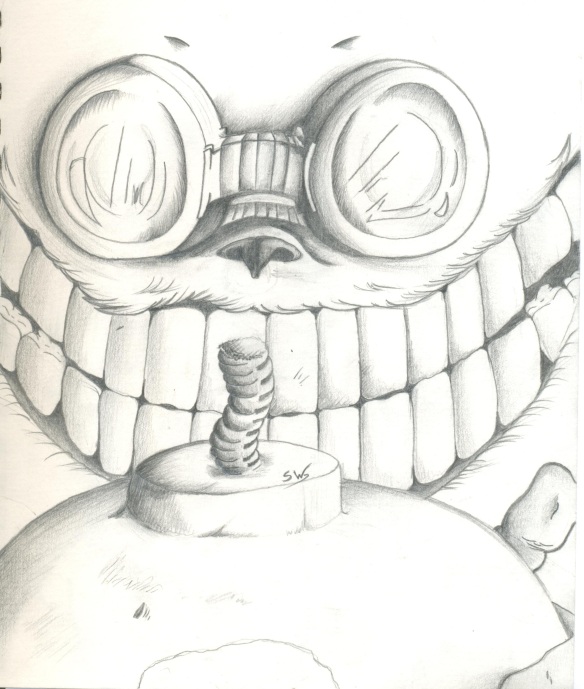 One of three League Of Legends fan art pieces that have been completed. I love the character and thought he was an interesting one to draw, so I made the focus on his goggles and that maniacal smile. The depth of shading makes for a grittier and more professional (in my opinion) overall drawing and I am happy with it. Of course, I have also posted this on my DeviantArt account. My signature is located at the base of the bomb wick… Nothing too fancy, but it’s good enough. Hope you enjoy and please comment, as I would like to get better at this.

Need to find something? Search here.

When HAS Seth posted?